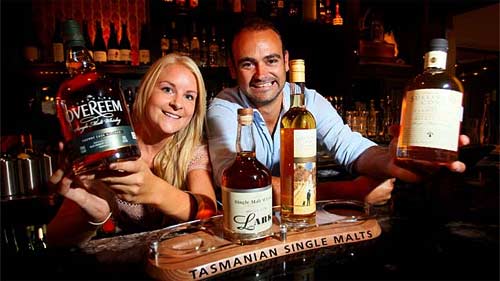 In 2013, just over 1 million visitors chose Tasmania as their destination, and no wonder, since Tassie may be a small island compared to mainland Australia, but it’s an island filled to bursting with incomparable natural beauty. Tasmania has so much to see, from stunning coastlines, majestic forests, and spectacular mountains. At the same time, not only does Tasmania have a track record of producing food and wine worthy of such a beautiful place, but now the waters of the island are being used to create another unmatched taste experience – Tasmanian whisky.

The stunning scenery of Tasmania has been one of the island’s well-known features for some time, but the fertile Tasmanian landscape also offers up more physical delights to sample. Because of the qualities of the soil and the purity of the water, the southernmost state of Australia has always catered to those who visit to enjoy the finer things in life – with a real emphasis on fine food and some of the best cool-climate wines in the world, including Pinot Noir, Sauvignon Blanc, Pinot Gris, and an impressive range of sparkling wines. In fact, one option for seeing some of the most picturesque parts of Tasmania is to choose one of the local wine tours, since many of the vineyards are themselves idyllic examples of Tasmania natural splendour. Seeing some of the sights Tasmania has to offer with a superb glass of wine in your hand is a fine form of sight-seeing, and there are so many vineyards and locations to choose from. Best of all, many wine tours will also give you a chance to try a taste of Tasmanian gastronomy, providing a veritable feast of local flavours.

Despite having already built up a reputation for wine and food, the island has not been resting on its laurels, and continues to improve and develop the range of remarkable food and drink on offer. In one particular field, in fact, Tasmania has surprised the rest of the world and has begun to compete with far more well-established creators of taste experiences – specifically, in the distillation of whisky.

The Challenge of Whisky

It is important to note that Tasmanian whisky is competing with distilleries that have been running for centuries in Scotland, nor is the production of the ‘water of life’ out of barley and water a simple matter. Distilling whisky is no hasty affair, and it is not unusual for ten years to be the minimum age for a good whisky to sit in the barrel. Not only does the process of making whisky require a lot of patience, but every year an amount of the whisky will evaporate, and this ‘angel’s share’ can add up to a quarter vanishing over the course of twelve years. Good whisky not only requires good materials (especially a very pure water supply) but needs a considerable amount of time before a distillery can even start thinking about shipping out bottles. This has not deterred Tasmanian distillers, and in a remarkably short time, this determined group have made impressive advances in the production of quality whisky.

New Kid on the Block

Despite being a relative newcomer to whisky distillation, Tasmania’s environment and quality of water means that the island has the best possible ingredients for whisky. What has been surprising, however, is how quickly this new source of the ‘water of life’ and local distillers have started producing whisky that competes and even outdoes whisky from all over the world. Jim Murray, one of the world’s foremost whisky experts, compiles a highly respected in-depth analysis and set of tasting notes every year in his Whisky Bible, and in 2013 Murray praised the “staggering achievement” of Tasmanian Whisky at having produced some of the best whisky in the world. In fact, Mr. Murray’s nose for a fine drop appears to be well deserved, as it was only this March in 2014 that a Tasmanian distillery Murray had spoken very highly of called Sullivan’s Cove was awarded the prize for the world’s best single malt at the World Whisky Awards held in London. That is an outstanding achievement in such a short time, but merely an indication of the Tasmanian dedication to taste.

Like wine tasting, there are different whiskies to suit different palates – from the sweet to the smoky, and something is bound to take your fancy. After such unprecedented success, Tasmanian whisky will doubtless continue to grow from strength to strength, so perhaps consider choosing a Great Expeditions whisky tour so that you too can have a taste of what Tasmania has to offer.